Summary: Paparazzi are undoubtedly hated by the community, but they also pay an important role in modern culture. 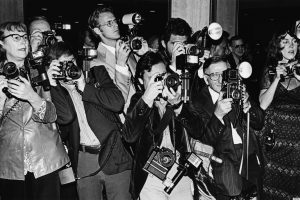 The much-disdained paparazzi are some of the most inconsiderate and selfish individuals to ever work in the journalism industry. But, is it fair for the people to verbally assault them as much as they do?

Paparazzi was coined in the 1960 Federico Fellini film “La Dolce Vita”. One of the characters that appeared in the movie was named “Parazzo”, which by definition is an Italian word that’s used to describe the irritating buzzing sound made by a mosquito – the word in itself is pejorative.

Now, most of these photographers are stereotyped as being intrustive and physically aggressive to celebrities. You see it everywhere. As long as there is a celebrity spotting, there are bound to be dozens of paparazzi littering the streets. Why? Because people want to see the latest in their favorite movie and television stars.

The Role of Magazines

If people didn’t read magazines or didn’t care about celebrities, the paparazzi might not even have existed in the first place. But, in today’s culture that wants the latest tabloid on meltdowns, divorces, and other personal events, it’s undoubtedly a hit. If you asked any paparazzi, they’d tell you if you don’t like it, don’t read the magazines. In many cases this is true, but it doesn’t give them a pass to continue their reckless abandonment of dignity.